Before the New Year, in the American magazine Newsweek, journalist Jason Lemon scared readers with Bandera, Petliura and the blossoming of ultranationalism in Ukraine. 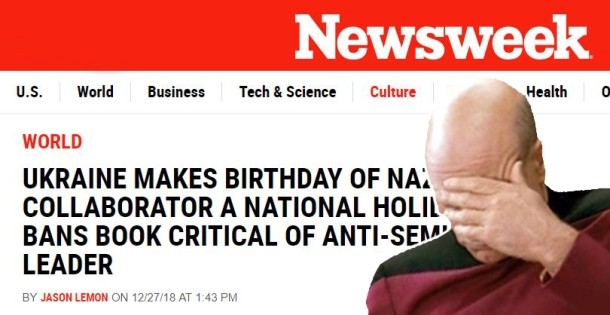 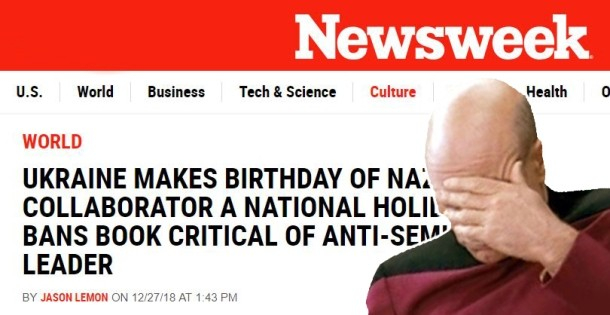 Jason Lemon is a journalist at the American magazine Newsweek. Previously, he wrote for The Atlanta Journal-Constitution on topics of health, science and the environment. But now, Mr. Lemon writes about politics in the "World" section of Newsweek.

On December 27, he published a text titled "Ukraine Makes Birthday of Nazi Collaborator a National Holiday and Bans Book Critical of Anti-Semitic Leader".

Instead of an objective coverage of the situation in Ukraine, Mr. Lemon's article contains Soviet and Russian propaganda clichés. And it violates number of journalistic standards.

"Ukraine’s parliament has officially designated the birthday of a prominent Nazi collaborator as a national holiday",Mr. Lemon writes. But in fact there is no "national holiday". The author violated the journalistic standard of accuracy of information.

Secondly, if Mr. Lemon calls Bandera a Nazi collaborator, then France and Norway, and Sweden, and Croatia, and Romania, and Slovakia, and Hungary "collaborated" in those years too. The Soviet Union also collaborated with Nazi Germany during 1939-1941.

Mr. Lemon occasionally recalls that Bandera collaborated with the Nazis to create the Ukrainian state. It was proclaimed on June 30, 1941, after which Stepan Bandera was thrown by the Third Reich into a concentration camp, and his three brothers were killed by the Nazis.

There has been written a lot about Bandera and the Jewish question. For example, Volodymyr Kovalchuk of the Institute of Archeography and Source Studies points out: "If one finds at least one document in which Bandera gives orders to destroy the Jews, this would be a huge discovery for historians." But obviously they are no such documents.

The text by the journalist Jason Lemon does not include a single comment from an expert from Ukraine, which is a violation of the journalistic standard of balance of opinion. Instead, the position of Israel is repeatedly mentioned.

This is probably because the Newsweek journalist was very inspired by the text of Cnaan Liphshiz, which appeared several hours earlier that day at JTA.

Jason Lemon continues: In December 2018, a book by Swedish historian Anders Rydell Book of Thieves was also banned in Ukraine. "The book critically analyzed the actions of Ukrainian nationalist Symon Petliura, whose forces killed large numbers of Jews in the early 20th century," the journalist writes.

The State Committee on Television and Radio Broadcasting of Ukraine then explained the prohibition by the fact that in this book "the author repeats the widespread by Russian propaganda fabrications about the leaders of the Ukrainian People's Republic."

For example, the Swedish author quotes the words of the murderer of Symon Petliura, the head of the Directorate of the UNR, Samuel Schwartzbard who is associated with the Soviet secret service OGPU - Joint State Political Directorate. Also, KGB agent Peter Deriabin called this assassination a special operation of the GRU.

Schwartzbard put seven bullets into Petliura on a street of Paris. The offender told the court that he had done this because allegedly 14 members of his family were killed under Petliura. Although during the arrest, he said that he had only "heard of the terrible pogroms that his fellow believers had suffered under Petliura's government." More on how a person who publicly killed Petliura was found not guilty at the trial by the French jurors can be read in the material by Alla Lazareva "Petliura in Paris. On the 85th anniversary of shots on the Rue Racine."

Recently declassified document from 1921 shows in black and white that Petliura, by contrast, tried to stop the wave of anti-Jewish pogroms. His signature bears the document stating: "As the Chief Otaman of the Ukrainian Army, I order you: to punish mercilessly Bolshevik Communists and other criminals, making pogroms and destroying the Jewish population, and all to a man to stand in defense of the poor and exhausted population and to deal with the bandits immediately through your military courts."

Professor of the National University of Ostroh Academy Petro Kraliuk states that anti-Semitic sentiments were stirred up already in the times of the tsarist Russia. Under the conditions of political changes in the years 1917-1920, they also became widespread in Ukraine, but Ukrainian state institutions tried to resist them. In addition, the UNR led by Petliura did not fully control this territory where other military formations such as the White Guardsmen also acted.

That is, "Petliura's forces that killed large numbers of Jews" is a myth of the Soviet Union's time. That is why the book was banned by the State Committee on Television and Radio Broadcasting.

Lacking only the FSB point of view

Bandera and Petliura are not enough? On December 17, Ukraine also voted against the UN resolution on combating glorification of Nazism and neo-Nazism! The source of this information for Jason Lemon was the central Russian State News Agency TASS.

Mr. Lemon only mentions that Ukraine and the United States (!) voted against this resolution, and that it was backed by 129 countries. However, he fails to mention that 44 countries abstained from voting. Most of them are European countries. 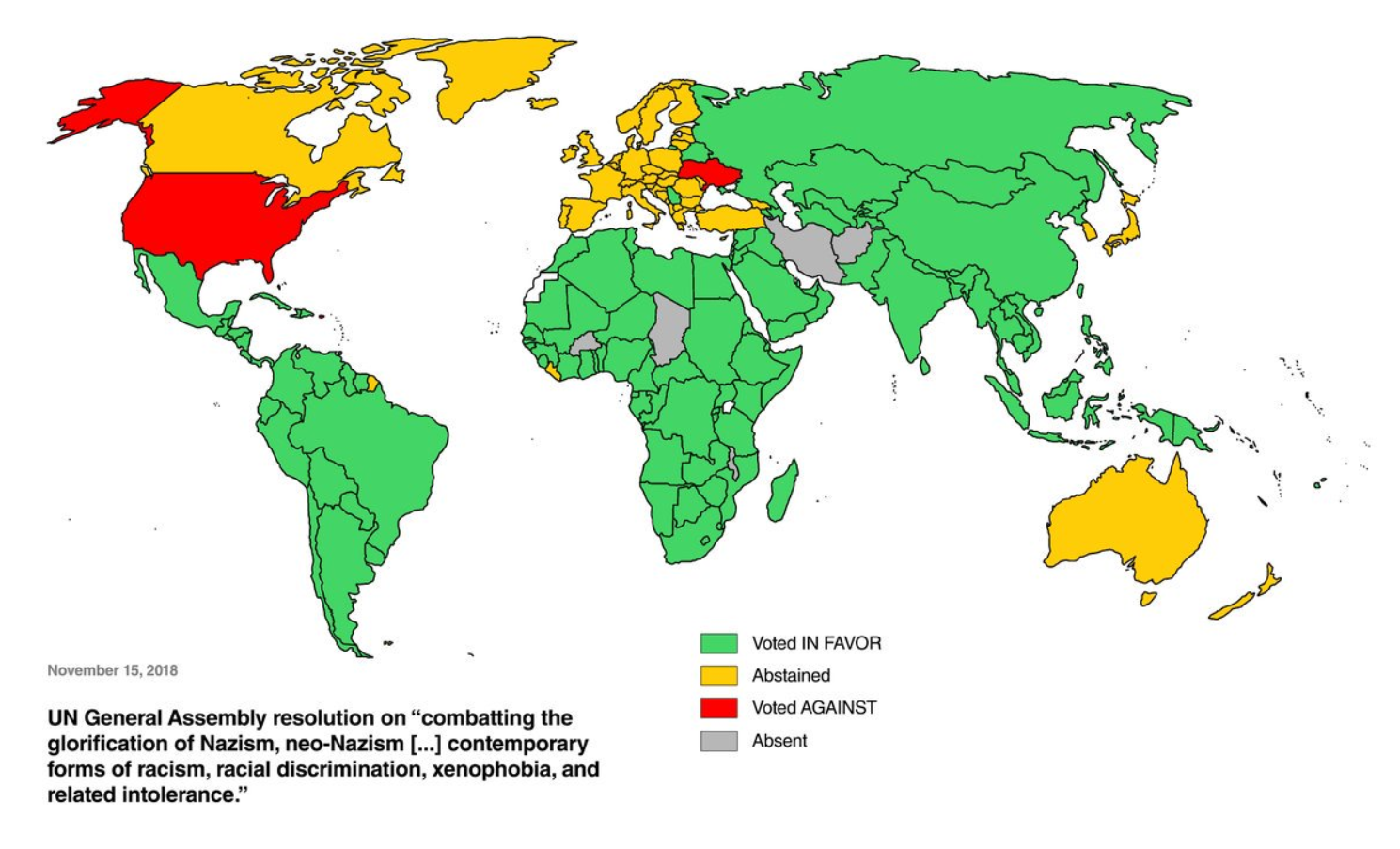 The countries that voted for the draft resolution by Russia on November 15, 2018 (colored green), against it (colored red) and abstained from voting (colored yellow). Source: reddit.com

Mr. Lemon simply repeated by this passage the messages of Russian propaganda. The guise under which the Russian media presented this "victory" is identical to the text of the Newsweek's journalist. You can check this out by reviewing news on other Kremlin websites: "RIA Novosti", RT, Regnum, "Pervyi Kanal" etc.

The journalist gives only one quotation concerning this vote; it is of the Secretary of the Security Council of the Russian Federation, Nikolay Patrushev.

No, your eyes are not playing tricks on you. In the fifth year of Russia's military aggression against Ukraine, after the occupation of the Crimea, the support of militants in the Donbas, an open attack in the Kerch Strait, Jason Lemon, in his text on Ukraine's voting in the United Nations, quotes a general of the Russian Army.

"The decision of the United States and Ukraine to vote against the resolution initiated by Russia is within the strategy of these countries for the use of neo-Nazi and ultra-right forces in their political interests," says Nikolai Patrushev, ex-director of the FSB of Russia. And for Mr. Lemon, this is a very valuable piece of information that readers should be told of.

Although, it seems, he was not interested at all, why suddenly the US, Ukraine and almost all of Europe did not vote for this resolution. If he were interested, he would discover for himself that the document has been adopted every year since 2005. Ukraine and the US have been voting against it on a regular basis over recent years. There are meeting records on of the discussion on this resolution on the UN website. They are in English and, if desired, Mr. Lemon could read them. But he did not do this and thereby he violated the standards of completeness and balance of information.

It is an annual power play by one country [Russia] attempting to exert influence over a region without genuine efforts to actually combat Nazism. And instead it is seeking to criminalize free speech and expression," stated the representative of the US to the UN.

Volodymyr Yelchenko, representative of Ukraine to the UN, reminded of the huge contribution of millions of Ukrainians in defeating Nazism. He once again confirmed that Ukraine condemns Nazism, racism, xenophobia, and stressed that the resolution has nothing to do with Nazism and other forms of intolerance. Yelchenko condemned the cynical attempt of the Russian Federation to present itself as a supporter of the struggle against Nazism and neo-Nazism, while simultaneously committing crimes against other nations. Referring to the propaganda motives of the resolution, he called on all delegations to vote against it.

Why the West does not support this resolution, explained in detail professor of European Constitutional Law at the University of Groningen in the Netherlands Dimitry Kochenov in an interview to BBC in 2016 (!).

"European countries will never support such an international document, because it is absolutely natural that Nazism and similar ideas are purely subjective. It means that who is to be considered a Nazi, who is to be called a Fascist depends, as a rule, on the speaker's point of view... The introduction of any prohibitions on the active discussion of such ideas into international law will in fact be a ban on historical research in this area," he said.

Jason Lemon, after a quote from the Secretary of the Russian Security Council, went on to outline the situation in Ukraine with "broad-brush terms."

"Human rights activists have raised serious concerns about the rise of neo-Nazi groups in Ukraine, particularly since Russian-backed separatist rebels took control of sizable portions of the country in 2014.  The conflict has led to an increase in anti-Russian sentiments and ultranationalist feelings. Some of the nationalists have turned to neo-Nazi ideology as well," he wrote.

The question arises: Who are all the people that the author refers to? Who are those "concerned" human rights activists? Where did the journalist learn about the "increase in ultranationalist feelings"? Similar generalizations are a violation of the journalistic standard of reliability. Recently, Euronews journalist Damon Embling has also used such manipulation when he has told about the introduction of martial law state in Ukraine.

In support of his judgments, the Newsweek journalist provides a text of a human rights defenders petition to Israeli court requesting the cessation of arms exports from Israel to Ukraine, which was published in the Haaretz newspaper. The weapon allegedly "falls into the hands of neo-Nazis". Although in the same material the Haaretz noted that the petition was turned down by the Ministry of Defense of Israel.

Mr. Lemon also provides a quote by Freedom House's Ukraine project director Matthew Schaaf, who said that "numerous organized radical right-wing groups exist in Ukraine."The conclusions of a report by this organization state: "Far-right radicals and extremists at present can claim neither significant parliamentary representation nor any plausible path to power in Ukraine.  However, their street activities are having a serious impact on everyday life and societal development in the country."

Let us go over to the data. Kyiv International Institute of Sociology conducted a survey in September 2018. It discovered that after the annexation of the Crimea and the war on the Donbas from 2014 to 2018, the level of xenophobia increased slightly, but later returned to the level of 2011.

Another survey called "Tolerance or intolerance. The sociological view" was held in December 2018 and showed that 73% of Ukrainians surveyed dislike the torchlight procession of nationalists. The photo of this procession is presented in the Newsweek material as if confirming the growth of "ultranationalistic feelings" in Ukraine.

Ukraine as a center of right-wing radicalism is a myth of Russian propaganda. During the war, no ultra-right party came to the Verkhovna Rada, although in many European parliaments such parties were represented.

Here is another surveyby the American organization Pew Research Center. According to its data, Ukraine has the lowest level of anti-Semitism in Central and Eastern Europe. 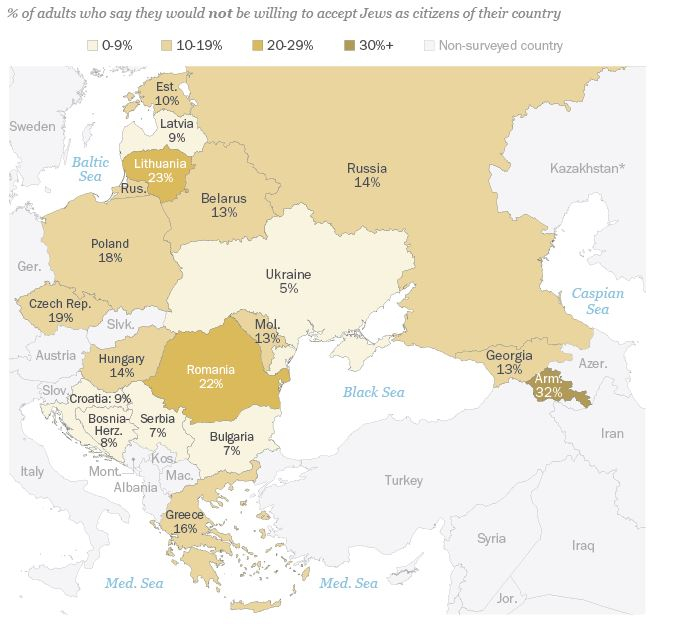 Percentage of the adult population who answered that they would not want to have Jews as fellow citizens of their country. Source: pewresearch.org

This strong argument bursts all the bubbles that the Newsweek journalist has stuffed into his text. Unfortunately, readers of this magazine have absorbed a selected portion of misinformation instead of objective information. 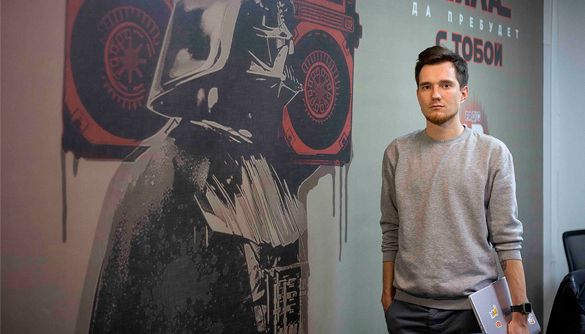 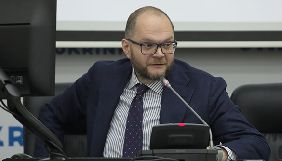