News Pieces of UA:Pershyi and Ukrainian Radio Are Far from Being Perfect 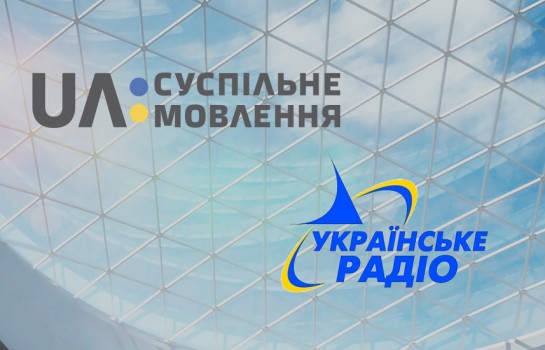 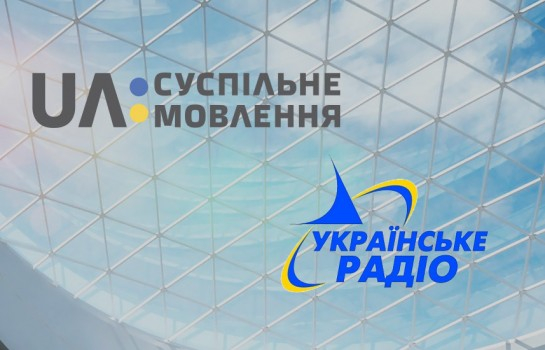 Key signs of the standard violations are marked in every material:

in yellow: the signs of violation of distinguishing facts from opinions (that is journalists' evaluations and conclusions),

in blue: the signs of violation of information fidelity (that is no or vague reference to the reliable information source),

in red: the signs of violation of accuracy standard (that is the inaccuracy in facts or critical vagueness of facts).

The observations are presented as follows: (bold and in brackets).

At the close of a story in bold, in descriptive way -- about violation of prompt information presentation, balance of opinions and information completeness.

The important daily topics are also covered though they were not mentioned in a news spot.

The text is from the transcripts of the Content-Analysis Center.

The violations of accuracy and promptness standards are defined based on the UNIAN's communications. If a certain fact is presented by UA:Pershyi and Ukrainian Radio in the same way and UNIAN does this otherwise, the fact coverage by the channels is considered to be correct. 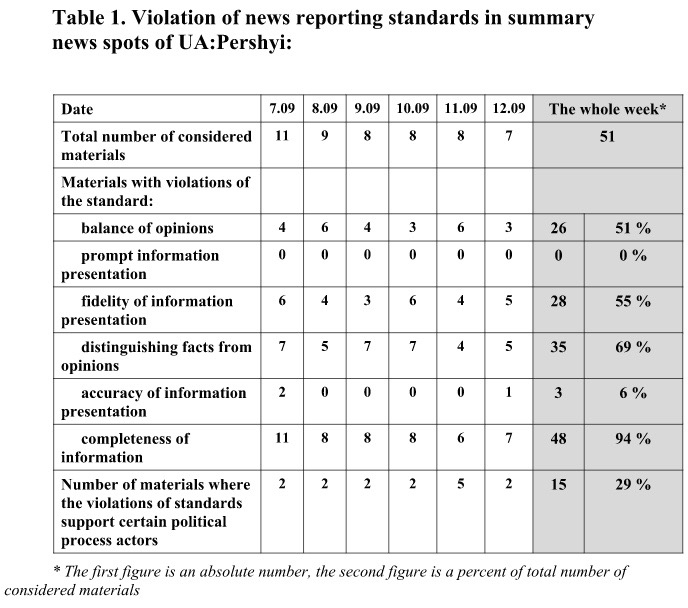 The Ministry of Finance is not going to levy taxes on small apartments and houses. The Ministry's Senior Natalie Jaresko explained: the press has spread faulty information about the real estate tax. According to Ms Jaresko, the owners of apartments up to 60 sq.m area and of houses up to 120 sq.m would pay nothing. They will pay for apartments up to 300 sq.m and houses up to 500 sq.m according to the new Tax Code. And Jaresko suggests levying the fixed tax of 25 thousand UAH per year on the larger habitaion.

Natalie Jaresko, Minister of Finance of Ukraine: The changes to the real estate tax are aimed at creation of fair system where higher taxes are paid by wealthy citizens that have large apartments and houses. So we propose to give the local authorities the right -- I would like to emphasize the right and not the order -- to increase the elite real estate taxation. This is about apartments over 300 sq.m area and houses over 500 sq.m only.

The material violates the balance of opinions: there is no opinion of another party of the conflict – the house owner who would have to pay the tax, no expert opinion (since the issue is controversial). Generally, the material is unbalanced in favour of the current authorities.

«The Parliament blocks the privatization process in Ukraine

The Parliament blocks the privatization process in Ukraine. This is the statement of the PM at the session of Financial Stability Council. According to Arsenii Yatseniuk, it has already been a year the Verkhovna Rada does not vote for the privatization legislation modifications offered by the Government. That is to allow privatization of: 13 commercial seaports, Kyiv's enterprise "Ukrspyrt" (Ukrainian Alcohol), "Artemsil" of Soledar and 372 agricultural companies. This year the State Property fund offers 'Tsentrenergo", 6 local energy stations and the same number of "Oblenergo" for open competition privatization. Odessa portside plant is going to be sold as well. The PM says that it was pre-evaluated to cost a milliard of USD. The final cost will be set by the bidding.

Arsenii Yatseniuk, Ukrainian PM: We have taken decision to keep the strategic enterprises state-owned. All other facilities have to be sold at transparent and at public auctions with the mandatory requirement to keep the benefits package for employees and to make investments to the Ukrainian economy».

The balance is violated: there should have been the response of members of Parliament to the PM's accusations of the Parliament. The material does not give necessary background if the PM's parliamentary faction has made any efforts to support the bill. All in all, the material is one-sided and incomplete in favour of the Government and its head.

Two Ukrainian servicemen prisoned last year nearby Illovaisk were delivered from captivity These are Sergii Furayev and Artem Komisarchuk, as informed by the Facebook of President Petro Poroshenko. According to the information of State Security Service of Ukraine, currently 156 Ukrainians are in captivity, the servicemen make about a hundred of them and the rest are civilians».

The social network communication is not true. Moreover, Proshenko is not the initial source of such kind of information. All in all, the violations of standards make this material absolutely beneficial for the authorities and Poroshenko personally (though he was not directly involved in the deliverance of the two servicemen).

«What EU expects from Ukraine, which of the reforms are the slowest?

What EU expects from Ukraine, which of the reforms are the slowest, any why the society does not feel them? These questions were among the topics discussed the last day of Yalta European Strategy. Andrii Gorodyskyi noted the proposals and assessments of European politicians.

Reporter: Fighting corruption is the slowest of all reforms in Ukraine. European Commission believes so. Johannes Hahn, the European Commissioner for Enlargement, welcomes the work of Ukrainian authorities. Nevertheless the advices to intensify the effort in this direction.

Johannes Hahn, Commissioner for European Neighbourhood Policy & Enlargement Negotiations: "I would like to repeat that I welcome the efforts made by the Government and Parliament of Ukraine especially in current situation. But it's about the time to focus on combating corruption. This is the pressing issue. Europe is ready to invest in Ukraine. But this problem should be solved at first".

Reporter: Ukraine was ranked the 142 place of Corruption Perceptions Index. And almost every third questioned businessman believes that the situation is getting worse. This hinders the rest of the reforms, say some forum participants. Others, like ex-minister of finance of Slovakia, think: that this is about the legacy above all. The reforms are being implemented but some politicians reluct and the society does not always understand them.

Ivan Mikloš, minister of finance of Slovakia (2002-2006, 2010-2012), counsellor to the minister of finance of Ukraine: The most important problem, to my mind, is the lack of communication. Today we were discussing the complicated financial situation, tariff increase and so on. But there should be communication with people to explain that these are not the consequences of reforms but the aftermath of the absence of reforms in the past. This is the legacy of 70-year Soviet regime and 25-year corrupted disfunctional state.

Reporter: Stephen Sackur, the presenter of HARDtalk, BBC. He is known for his straightforward and gadfly questions. This morning he questioned Arsenii Yatseniuk.

Stephen Sackur, BBC host (UK): You said that out ally has to be the Ukrainian people. I seems to me on my visit this time... that that alliance between the government and people is in very great danger... This country seems unhappy, divided and it seems very disenchanged with you and your government. Why do you think that is?

Arsenii Yatseniuk, Ukrainian PM: We are not the first one in the world and in Europe who passed this kind of reforms. We can easily ask president Kwasniewski what happened in Poland 20 years ago with a number of Polish politicians, for example, with Balcerowicz. They passed similar tough reforms in energy sector, tax reform, social reform. And this is normal when people are upset when you increase utility bills by six times, when you impose new taxes, when you entirely overhaul social security system, when you close the tax loop holes, when you press on the oligarchs that own key Ukrainian TV-channels and a number of enterprises.

Reporter: First of all, the European Commission expects from Ukraine the judicial and financial reforms, public administration reform and decentralization. They say: the Ukrainian Government assured that despite the coalition turbulence, the reforms will progress. The evaluations of Ukrainians reforms differ. The current representatives of European Commission and other European institutions welcome the things that have been done already. And say diplomatically that there is still much work to be done. Former European officials are more forceful: much work should be done now. And the audience applauses when the Ukrainian government officials are asked: what has been done?"

All in all, this material is unbalanced for the benefit of current authority and PM Yatseniuk in person. 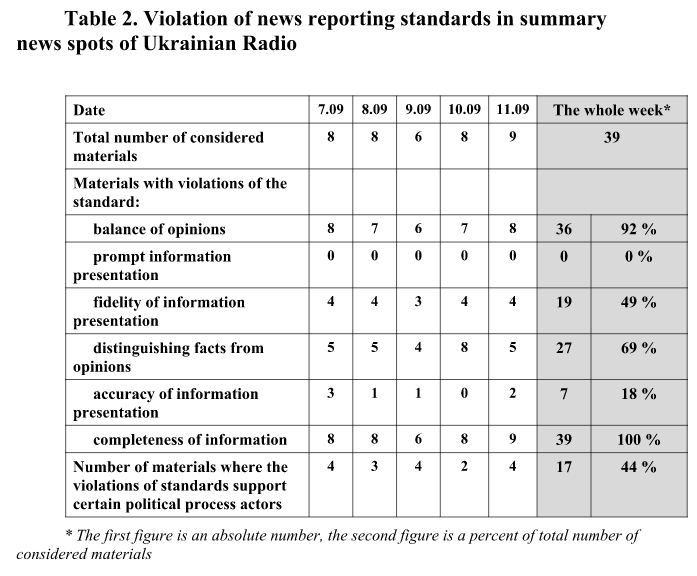 Inna Maretska, host: There are not grounds for the social sorts of bread to get more expensive. This was said by the Director of the Department of Food, Ministry of Agricultural Policy, Dmytro Shulmeister during the briefing. He says that the price decrease tendency is observed. At the world markets as well. Moreover, as recent data show, (from whom?) concerning the crop, Ukraine produces twice as much products as it can consume. Though the insignificant (the boundaries of the thought of Shulmeister are unclear, maybe it was his judgement, but it is perceived here as the host's words) price increase, 5-7%, by the end of the year is anticipated. With respect to some (too vague) of food products. Dmytro Shulmeister continues.

Dmytro Shulmeister, Director of the Department of Food, Ministry of Agricultural Policy: We are expecting that the decree of the Cabinet of Ministers 1222 on price declaration will be cancelled and that the modifications will be introduced to the decree 1548 that has been initiated by the Ministry of Economic Development and Trade. As about milt, we believe that there will be an insignificant growth by the end of the year. this is caused by seasonal and regular milk production fluctuations. We expect sugar price growth. But this is more a psychological factor. And we, the ministry, are going to handle this. Because, as usual, in the end of sugar refining period when sugar manufacturers see that they have sugar as much as the market demands they may be on the long side of the market. We are going to address this issue to the sugar producers to prevent it".

The balance of opinions is not maintained: the evaluations of the state and trends from the official of the Ministry of Agriculture should be balanced by the expert opinion at very least. In fact, the position of the collective part of conflict is not represented, this is about average buyers. Moreover, the official in a certain way accuses the sugar producers -- and there is no opinion in response. The information is not complete, for example, there are no facts supporting the alleged "price decrease tendency" (which of the products did see the actual price decrease?). The audience was not explained what the decrees 1222 and 1548 mentioned by the official are about (why the journalists would mention them on the air?). All-in-all, the gross violations of standards is the material are in favour of the government.

Inna Maretska, host: - On 30 September, the EBRD is going to consider granting of loan to Ukraine, 300 mln USD loan for natural gas purchase, as informed the finance minister Natalie Jaresko. Ukraine needs gas for heating in winter period. Previously, the PM Arsenii Yatseniuk said that the Ukrainian subsurface gas reservoirs have stored 14.5 milliard cubic m of gas. But by the beginning of heating season, this figure should be 19 milliard".

There is not balance of opinions: the topic is complex, and the PM's evaluation is cited though there should have been the expert opinion. And, obviously, there should be the critical opposition to the government: is this loan that necessary, how would it affect the external debt of Ukraine, etc. There is no complete information: the mention of 300 million dollar loan needs a detailed background, the very figure conveys nothing to the audience: how much gas can be bought with this money, what for this gas will be used, etc. All-in-all, the material features gross violations of standards in favour of the government in general and Jaresko and Yatseniuk in person.

Monitoring of keeping to professional standards in the operation of information services of UA:Pershyi and Ukrainian Radio is performed by the non-governmental organization "Telekritika" within the project "Strengthening Information Society in Ukraine" financed by the UE and Council of Europe.  The monitoring is aimed at promotion of the media literacy of Ukrainian society, stimulation of media accountability, observance of journalism standards and media product quality increase. 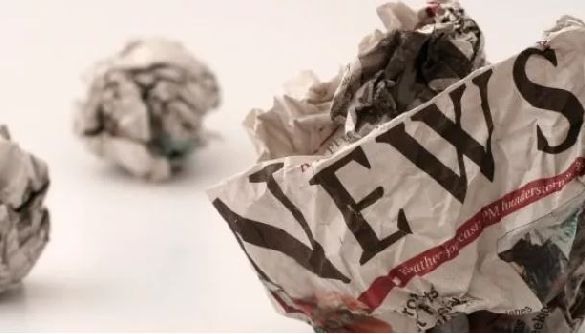 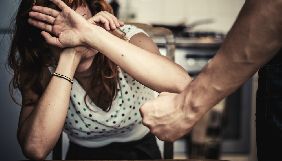