Today, on the Day of radio and TV industry workers, we urge Ukrainian media workers to join the MediaMovement.

Seven years after the Revolution of Dignity, the independence of Ukrainian journalism is under attack again. Professional standards are being replaced by anonymous channels, bot farms, and oligarch-owned media that only serve their sponsors. Business moguls are strangling the media. While the government, which is supposed to protect the freedom of speech, is the one suppressing it.

We are calling for those reporters who remain honest in spite of the current environment. Those guided by ethical standards and not by someone’s wishes. Who refuse to put a price tag on their conscience. It is time to unite. New elections are coming soon and everyone knows what that means - renewed pressure from oligarchs, business moguls, politicians, and the government.

Separated, we are powerless against this threat. Together, we are unbeatable. We proved it during the 2004 journalistic revolution and the Stop Censorship movement in 2010-2014.
However, now we have an even more ambitious goal before us: creating an efficient self-governed journalistic organization that will be capable of combating the business and political pressure put on the freedom of speech. An organization that could unite all Ukrainian journalists.

If you support our cause, visit https://forms.gle/fipHZBvYAefGjTjx6
The newsletters will contain all the information about the MediaMovement, including the criteria and procedure for joining the MediaMovement. Join us. And together we will protect our voices.

Mykhailo Tkach, head of the Investigation department of Ukrainian Pravda 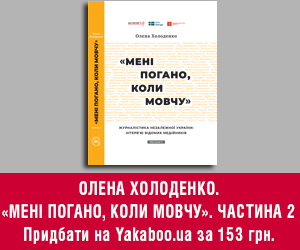